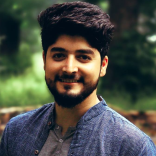 Peerzada Muzamil is a Delhi-based journalist.

Zendburgh Zevane is buried under a three-inch-thick sheet of fluffy white snow; it is snowing hard and silence weighs down the air, save few faint and intermittent dog barks. A rigid tall man scurries through the Thallstreet, crackling the snow beneath his feet, making the sound akin to a mouth chewing on a thousand grains of roasted rice.

At the end of the street, a large gate stood sturdily against the forces of nature. The tall man wrenched it open and ŌĆō while it made a creaking sound ŌĆō surged towards the two-storied house, his feet hardly touching the lawn. The door of the hallway was kept ajar, willfully perhaps, to welcome the strange visitor. How long his overcoat was. As he darted in quickly, hardly bothering to look around the living roomŌĆö dust-laden but elegant mahogany furniture, a grand piano in a corner and an aquarium beside it, surprisingly without fish, and a large wood-framed painting of The Colosseum standing stillŌĆö and turned towards the other door to the left. No sooner did he rap on it, twice or thrice, a startling masculine voice snarled from inside, ŌĆ£Come in Gentleman! ItŌĆÖs not lockedŌĆØ. He entered without shame.

ŌĆ£I am extremely sorry Mr. Pallicton, actually I was just, I mean uh… Yes, my carŌĆ” my car, you know, it was not starting and um.., I had to come by foot.ŌĆØ

Erwin Pallicton was leafing through the book, perhaps his recently published novel: The Strange case of Charles Hagginson.

ŌĆ£Oh, Heavens!ŌĆØ exclaimed the vexed physicist, ŌĆ£For GodŌĆÖs sake have some pity on my bones, I canŌĆÖt even feel my nerves. I am cold and hungry, canŌĆÖt you see that?ŌĆØ He put the briefcase on the floor, sat on the armchair near the fireplace, doffing his hat on the mantelpiece. ŌĆ£And please keep quiet until veins de-freezeŌĆØ

ŌĆ£Stupid!ŌĆØ Pallicton whispered to himself and tossed the book on the table. He took a cigar from his pocket and lit it, coughing all over the table raucously. The cigar went off. He knit his brows with impatience and paused.

ŌĆ£Do you have something to eat?ŌĆØ asked Malovich, slowly stooping over the fire and dangling his palms over it.

ŌĆ£You are not in luck!ŌĆØ Pallicton pointed towards the plate, on which lie some terribly nibbled bones.

ŌĆ£I suspect that, yes, if we do not start working right away!ŌĆØ

ŌĆ£Why would a writer require travelling back into time? Are you going on a dinosaur expedition?ŌĆØ

ŌĆ£Here we go finallyŌĆØ Pallicton sighed. ŌĆ£Now listen to me; I just want to change the conclusion of my book. The ending is not just right!ŌĆØ

ŌĆ£I want to replace some passages which I have already written, you see, I have kept it open-ended this timeŌĆØ Pallicton points towards the pile of papers.

ŌĆ£Ha-ha! Are you kidding me? This is absolutely ludicrous. Do you know about the Grandfathers paradox? You canŌĆÖt go back in time and kill your own grandfather. How would you even be existing right now?ŌĆØ

ŌĆ£There is no way to resurrect my protagonist. I just canŌĆÖt fool my audience around, dear Malovich, by bringing back the man in the sequel who had been burnt in front of the public. I just canŌĆÖt. I need your favour, if you may, please. ŌĆØ

The clock strikes twice. The excruciating haggle ends, partly because the time was running out but chiefly because they were tired of the banter.

ŌĆ£But I must say Pallicton, this attempt will go abortive.ŌĆØ Malovich picked up the briefcase and put it on the table and opened it. He took the clock-like gun from the briefcase and set the spatial and temporal coordinates on the dial.

ŌĆ£Here you go, 4th of previous July, back to your own study.ŌĆØ A whirling rope of electric current darted from the gun clung to the wall like a spiderŌĆÖs web. A glimmering whirlpool of energy began to rotate about itself on the wall, and the thing kept expanding. It was like a portal to the other universe, like the one we see in popular sci-fi television.

ŌĆ£This is called WormholeŌĆØ, exclaimed Malovich. ŌĆ£The window to your past, jump in it, lest it vanishes and you would have to wait for another hour to build it up. You have just 128 seconds to jump in, the slightest delay will land you in a space-time singularity, and youŌĆÖll never be returning back.ŌĆØ

Erwing swallows his throat, and like a wind-cock, glaring from the wormhole to his friendŌĆÖs evil face and vice versa, incessantly.

ŌĆ£My dear friend, we are running out of time, if you donŌĆÖt jump, I warn youŌĆ” Nobody knows what and where this singularity leads to. You have just got a few seconds to jump in, hurry up!ŌĆØ Malovich said. ŌĆ£Pallicton, quell the fear and jump inŌĆØ he added.

This comment gave an impetus to PallictonŌĆÖs fears. Pallicton became pensive, pondering over his future inflictions that this jump over him would wreak upon, the other reason that amplified his fears being that he hardly understood physics.

ŌĆ£Take this Wormhole Gun with you. When you get your chore done, just use it, as I did, to come back. And please, donŌĆÖt you dare to touch the Spatial DialsŌĆØ Malovich pushed the Wormhole Gun into his palm.

PallictonŌĆÖs face blanched with fear. He somehow accumulated trifle courage and strolled towards the Wormhole with the Gun in his one hand and the folded pages in the other. He walked towards death.

ŌĆ£Wait, wait a minute PallictonŌĆØ Malovich stopped his friend. ŌĆ£Take this chip, keep it safe, when you come back, just show it to me. It is just a precaution or evidence in case I forget about your voyage.ŌĆØ Malovich put the chip into the pocket of PallictonŌĆÖs coat.

Pallicton bade adieu to his friend with the air of a solider and moved glibly towards this bizarre-who-knows-what-hole. Adrenaline rushed through his nerves and he jumped.

PallictonŌĆÖs journey through the wormhole was astounding and petrifying. He could barely hear anything but a buzzing din. All he saw was the bizarre imagery of colours and geometric shapes running in a frenzy into each otherŌĆöa kaleidoscope went wildŌĆö just like a fit of euphoria does to you after drugs.

Pallicton, unlike Alice in her wonderland, crashed on the floor on the other side of the hole, with a dour whack, almost breaking his shoulder. Something happened: the dials on the gun were in disarray, the arrangement was altered, but he did not know it.

Voila! He was in his own study! The sight perplexed him. He peered out through the window. It was a clear sunny day, unlike the winterŌĆÖs night, he came from. He stood up glibly, forgetting about the pain that this crash had just inflicted on his shoulder. His mouth fell agape after seeing the date on the newspaper lying byŌĆö July 8, 2034. He was perplexed, for these minuscule eventsŌĆö one after the otherŌĆö did not only confirm the authenticity of the experiment but also contented him, that now he was in a sound condition and his machination would manifest into a reality. He moved towards the table and opened the drawer where the manuscripts lounged besides few paper clips, a slip pad, a fountain pen, and a pistol.

Pallicton heard the sound of footsteps which became gaudier and louder every second. Perhaps somebody was surging towards the study. Pallicton panicked, he took the pistol from the drawer and aimed at the door and stood there, in an anxious ambush, hands quivering in fear. He was now sweating already, partly because, coming from the winter, his clothes made him uncomfortably warm, but chiefly because he was frightened.

ŌĆ£WhoŌĆÖs there?ŌĆØ came a familiar voice from the outside, and no sooner did the door open than he saw his own selfŌĆö Erwin Pallicton, a miserable person, ambitious but uncannily unsure about his prospect in the writing industry. Astounded they were, each of them seeming the reflection of the other in the mirror, gun in the time travellerŌĆÖs hand being the only difference.

Before anyone of them could say a wordŌĆö BANG! Pallicton shot his time twice ŌĆō a centimetre long bullet right into his brow and he was dead. ┬ĀPallicton fell down in shivers, for now, he was a slaughterer, he slew his time twin, or in other words, he killed himself. However, he did not forget about the mission for which he had travelled so far. He stood up, overcame the morals, and interpolated the manuscript. Before he could create another wormhole, he pushed the pistol into the palm of the corpse! Why? Pallicton didnŌĆÖt feel remorseful for what he had done. His conscience was drowning in triumph.

He was drunk in his triumph so much, so intoxicated and corrupt that before checking the setting of the dials of the gun, he flung the current on the wall and conjured up another wormhole and dived.

He came out from a billboard in the street, this time it was autumn. Everybody on the street gawking on him with the air as if they knew about the crime that heŌĆÖd just committed. He, at once, rushed towards his home, down the street, gasping for breath and to his surprise, found the main gate meshed by the weeds, rusted and locked as if it was locked for years, the marble plaque too was eaten up by the green algae, completely illegible, and the metallic mailbox rusted.

He promptly peered through the fenced gate and all he saw were the ruins of his houseŌĆö abandoned. The lawn was buried under the autumn foliage, the tiled roof of the house desecrated and weathered, and the chimney stooping. Baffled, he ran towards the end of the block, to the tobacconistŌĆÖs shop at the corner, gasping for breath. The tobacconist had turned very oldŌĆöhis face, emaciated and full of furrows, turned pale. 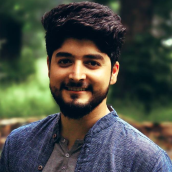 Peerzada Muzamil is a Delhi-based journalist.

The Melancholy Town Where No One Smiles