Adil Hussain is a freelance photojournalist based in Kashmir.

Name, Fame, and the Game: Sham of Self Publishing in Kashmir

Over the years, Kashmiri firemen have emerged as reckoning crisis and disaster managers fighting the valley’s fired up situations amid ire and irony.

As the tribe of arsonists grew and gutted landmarks in some cindering instances of violence in the valley since 1990, Mohammad Akbar Dar realized that his routine firefighting job has become a wartime assignment. 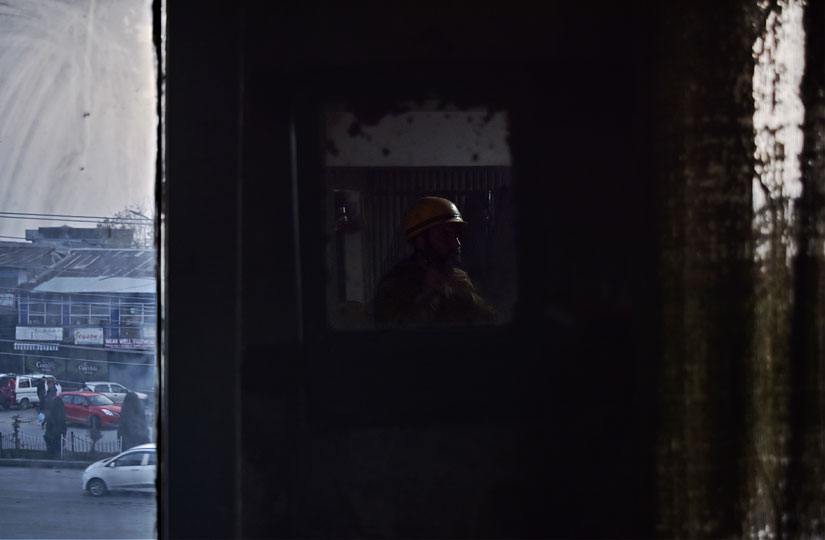 Today, he may not be vocal about everything he saw and experienced in his perilous profession, but he clearly remembers infernos and conflagrations leaving behind scorched earth in the defiant region.

Fighting big flames that reduced the totem towns of Chrar-e-Sharief and Sopore to the smouldering sites during those harrowing days of the nineties made Dar’s dousing dozens “fire angels” for many. 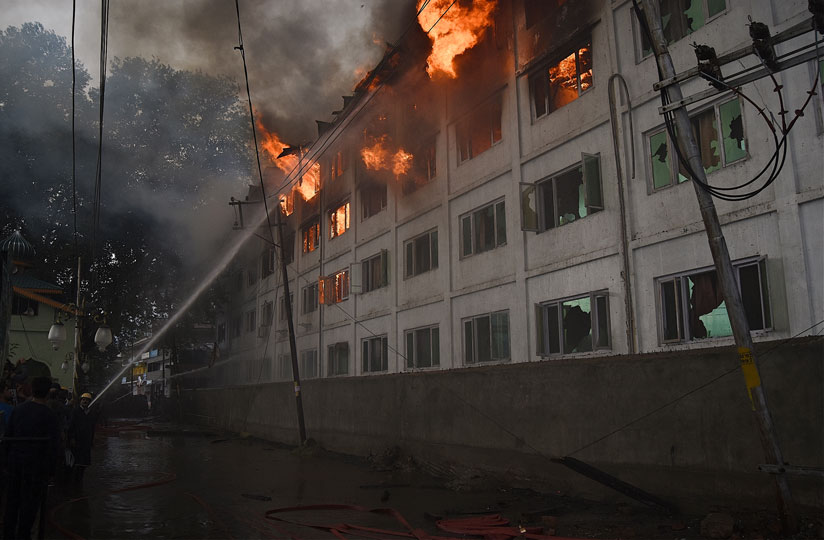 “But despite playing hide and seek with death to safeguard people, we only get abuses in return,” Dar, chief of the Fire and Emergency Services Department in Srinagar, rues. “It’s a thankless job.”

This anguish majorly stems from the frequent frenzy these firemen face on the ground. 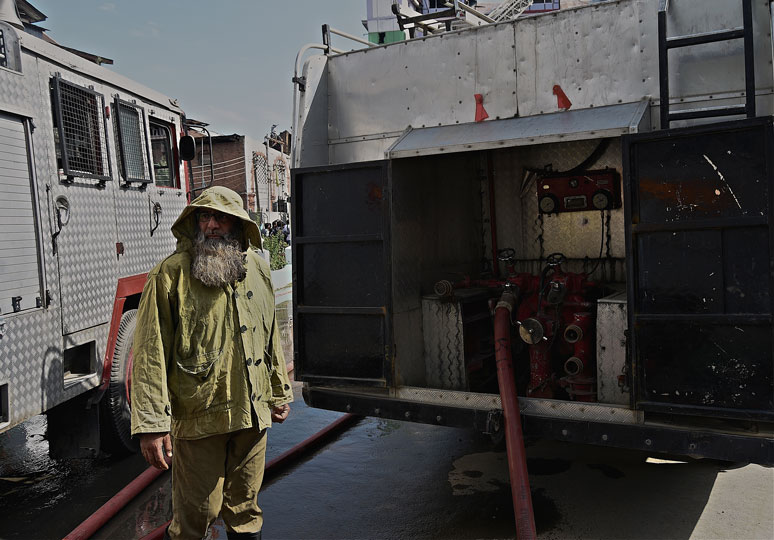 Cut to 2012 summer, and Dar’s desperate water-cannon colleagues were caught in the sentimental storm in Srinagar’s Khanyar area. The early-morning ‘fuse failure’ had set the 206-year-old Dastgeer shrine on fire.

“If only those raged residents had allowed us to do our job, we would’ve saved the sacred structure from gutting,” Dar recounts. 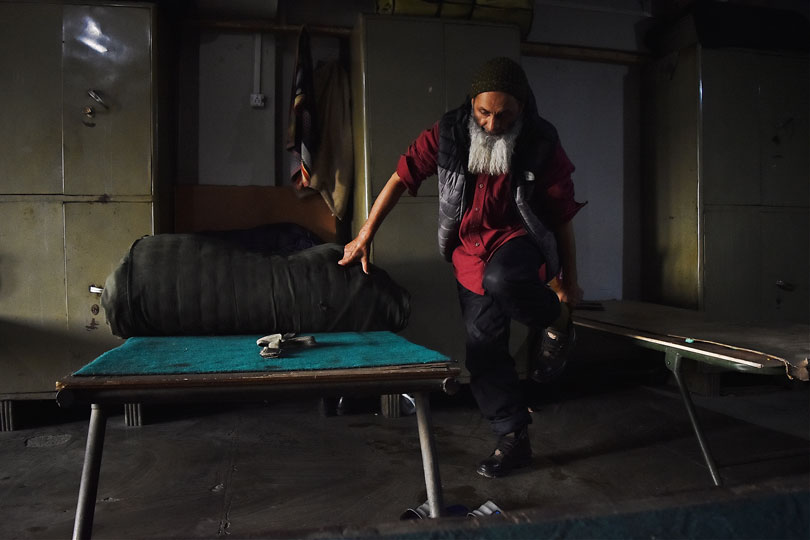 His colleague, Mohammad Shafi Reshi, details the post-firefighting distress in a fireman’s life.

“We retreat to the station, rinse and repeat,” fireman Reshi says. “Eventually the mental stress comes with the worst flashbacks of the incident.” 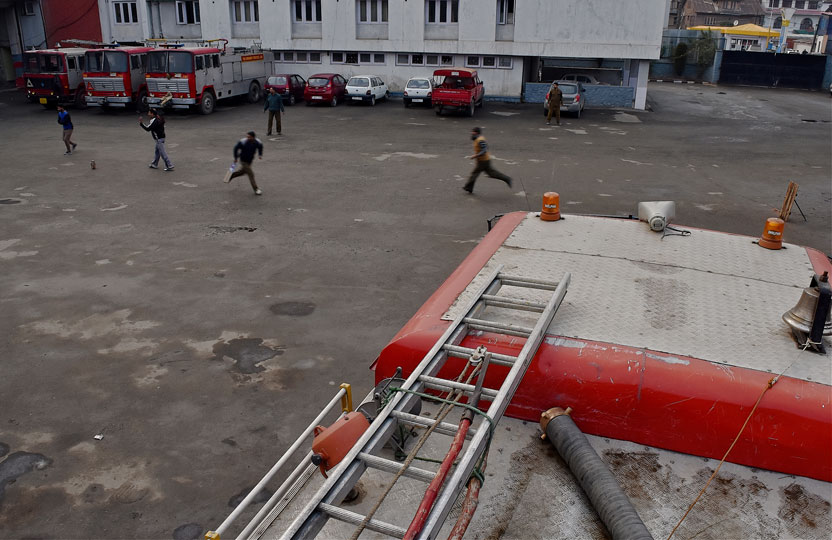 Such events apart from the new-age fire offensive—wherein the so-called secret houses of militants are being blown and blasted—keeps Dar’s tribe busy in the valley’s strife-torn landscape.

This pressing task on hand is a clear quantum jump from Kashmir’s fire-plagued past under Dogras. 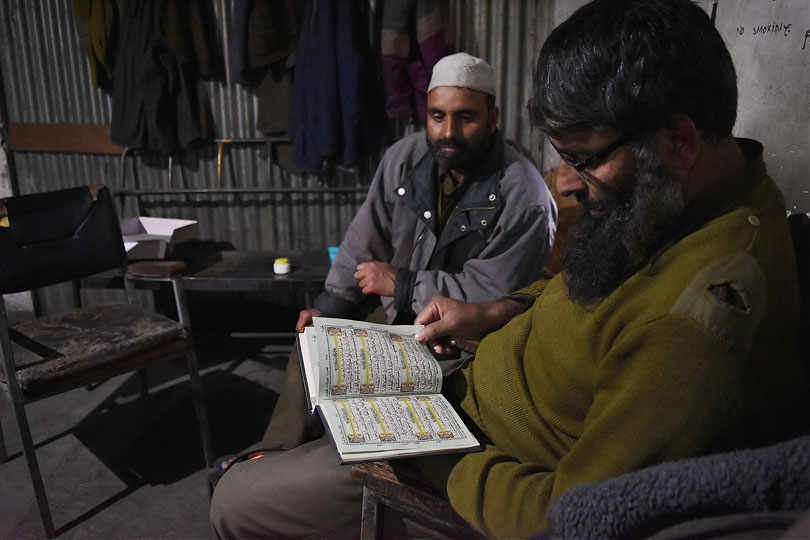 From a single fire station in Srinagar in 1893, Kashmir’s firefighting power has today become a big fleet.

“Fire and Emergency Services department in Srinagar is one of the third oldest fire brigades and fourth among the largest in India, in terms of both call volume and size,” fireman Dar informs. 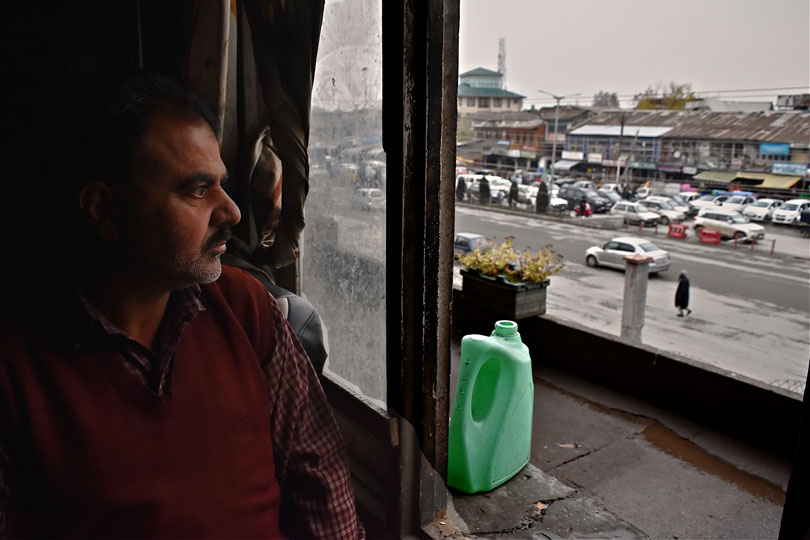 “It has roughly 1,500 employees and 20 stations along with one river fire station and six fire posts.”

But despite this firefighting power, Kashmiri firemen have to first deal with the flying tempers, especially when the ‘lit-mob’ believes they can douse it better. The conflict only fuels such fired up situations on the ground. 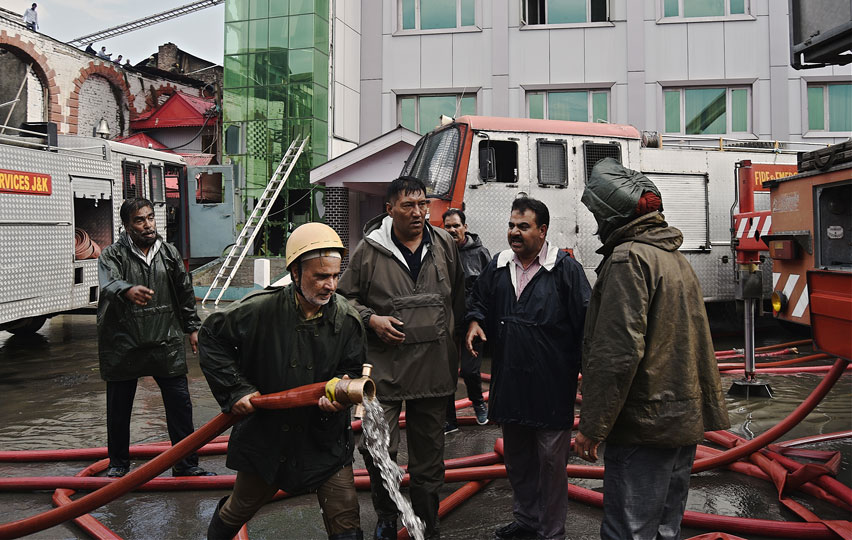 When fire alarms became frequent and derailed Kashmir’s calm in the 90s, Ghulam Nabi Khan drove the giant pumper truck carrying 5,000 gallons of water and a group of firemen to the blazing sites.

But now, the 60-year-old fireman mostly drives the siren-wailing truck on dilapidated roads full of traffic jam and security hurdles. “These hitches only beef the blaze,” he says. 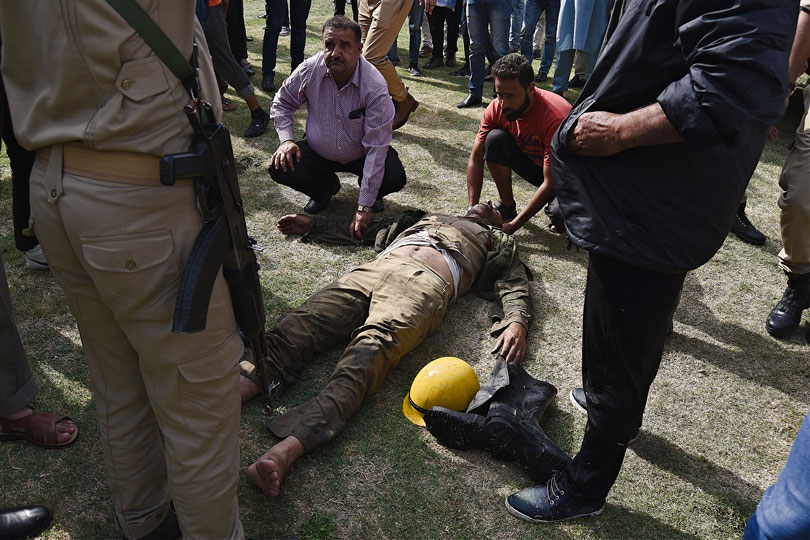 Despite these hurdles, firemen can’t complain much, as they’ve to be ready for the untimely fire alarms.

Someone like Asif Jameel learned this lesson when a sudden call caught him off guard one day. 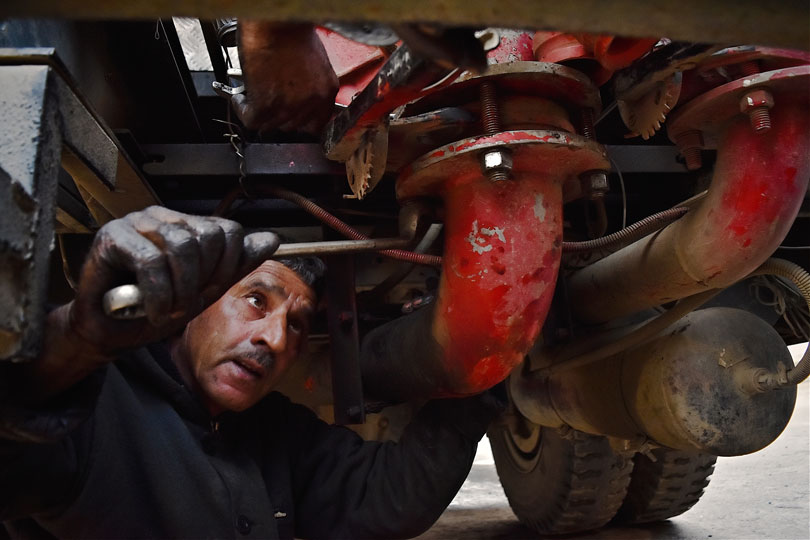 “I had taken an hour’s break to visit my ailing daughter that day,” Jameel recalls. “But soon an emergency call came and set me in motion.”

Similar call made his colleague to take a U-turn one late night, when he was riding home after his shift. 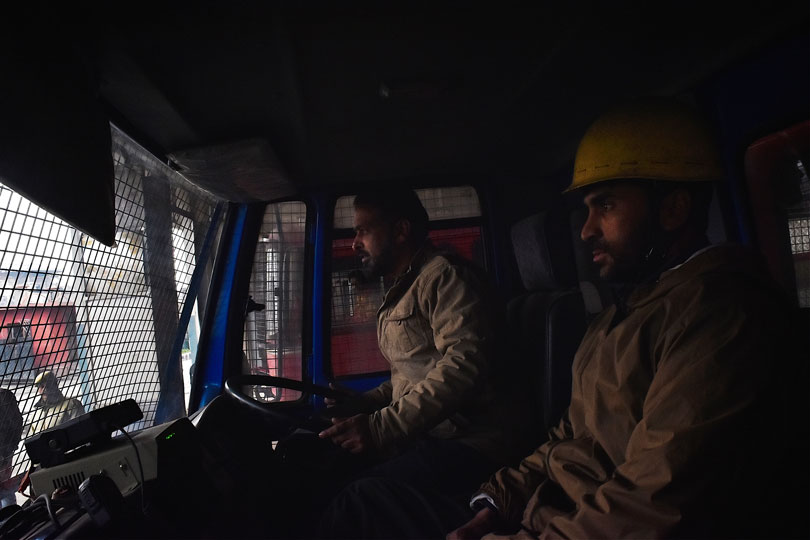 Fireman Mohammad Syed was informed on the dark alleys of his hometown that Khankah shrine in Downtown Srinagar has caught fire.

“As I rode back towards the office, I met a freak accident and suffered bruises in my body. But then, I had to hold my hose that night for Kashmir’s spiritual shelter.” 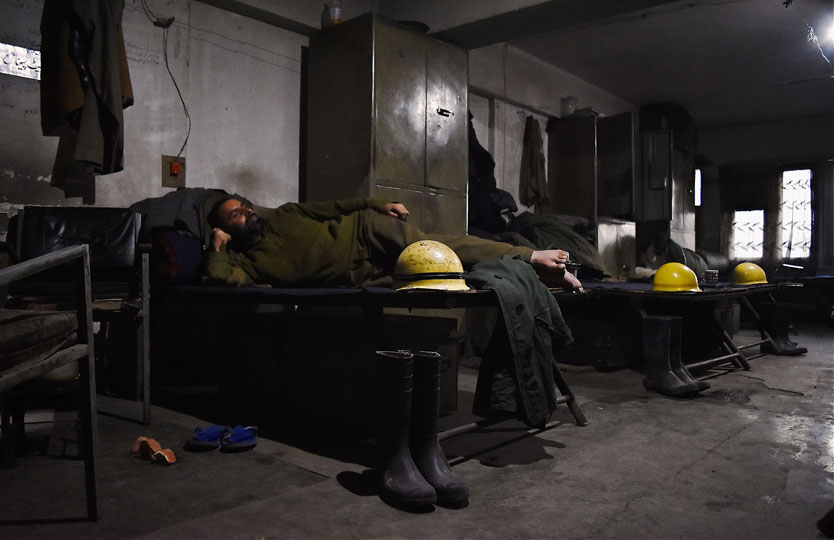 Since people were sleeping, fireman Syed and his colleagues had reached the blazing spot within no time.

But despite these heroics, the constant nature of their crisis-managerial job leaves many of them disappointed at the end of the day.

In Pictures: Shades and Shadows of Seasonal Schooling 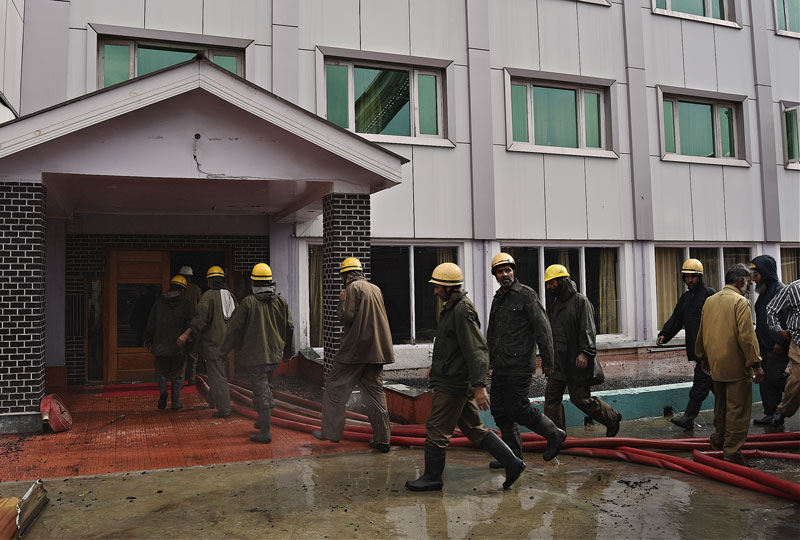 “No college is dedicated for further studies in firefighting in Kashmir, which robs us from training and rank promotion,” says fireman Manzoor Ahmad.

“All we’ve to do is carry on our duty until a person dies and the department remembers him for a few minutes at his grave and console his family verbally.” 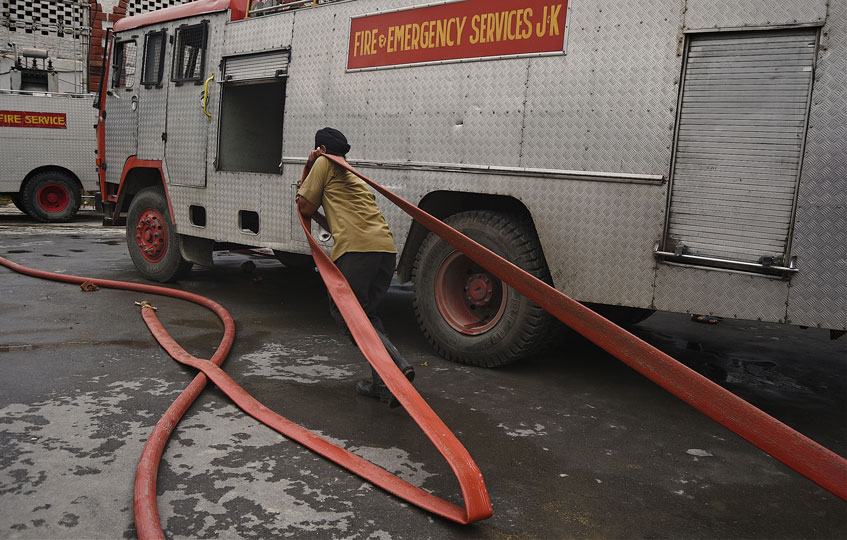 But when alive, their families keep nagging them to part their ways from the “hazardous job”.

“My daughter told me one night, ‘Why don’t you leave this dangerous job? I can’t afford to lose you! Let you live as a vendor for your family, than die as a firefighter for your indifferent department.’ ” 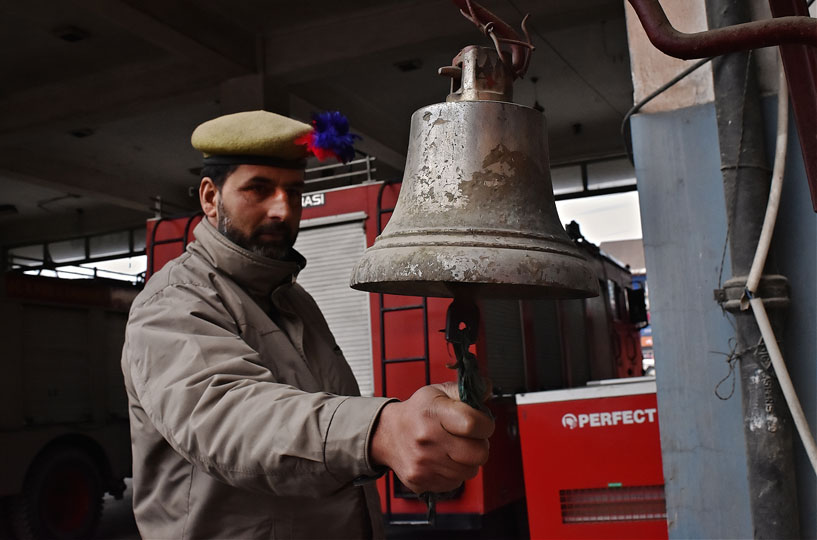 That night, fireman Abdul Rehman finally made up his mind to resign from his post the next day itself.

“But then, that night a loud bang, followed by big flames, shook our neighbourhood,” Rehman recalls. “I called up my office and rushed instantly to the spot.” 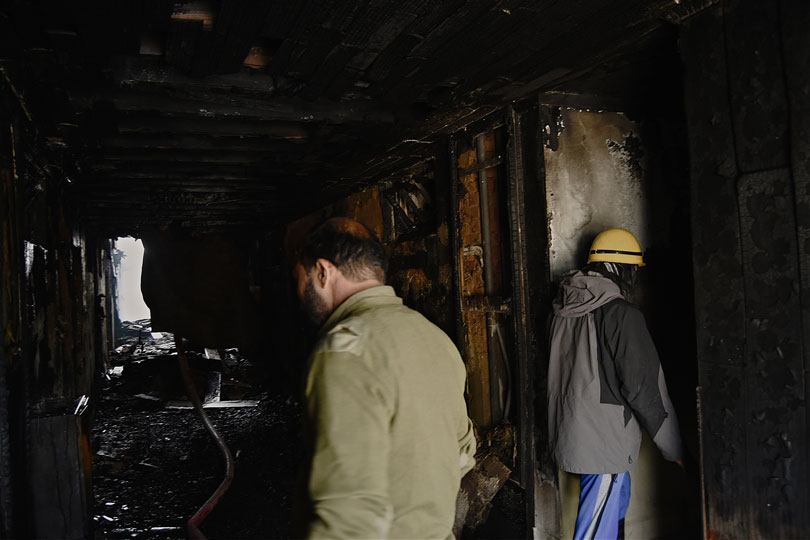 Without his firefighting gear, Rehman jumped into the burning house and managed to evacuate inmates safely.

Until his fellow firemen reached there, he had managed to save the costly wedding items of a would-be bride. 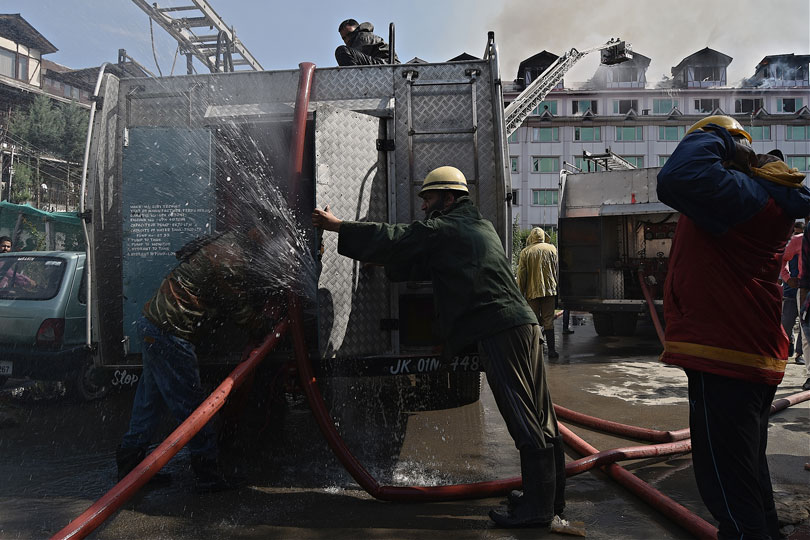 “As I was about to leave the spot, I saw my daughter Nusrat consoling that prospective bride on the street,” the fireman recalls. “That girl told my daughter: ‘This nobleman saved my marriage by preventing my wedding items from becoming an ash tonight.’ ”

Hearing that, Rehman’s daughter, Nusrat rushed to hug her fireman father and told him in a choked voice, “You’re my hero, Dad!”

(This Photo Essay appeared in December 2020 print issue of the Mountain Ink.)

Adil Hussain is a freelance photojournalist based in Kashmir.

Beyond Sher-Bakra Feud, Kashmir’s Chequered History is a ‘Tag of War’

When Headhunting Ended the Last Truce at LoC

When Headhunting Ended the Last Truce at LoC

Kashmir’s ‘Shahjahan’ Who Neither Got His Mumtaz, nor Mahal