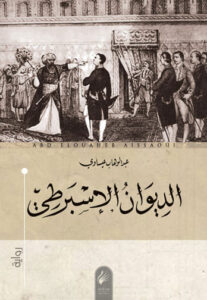 The Spartan Court follows the interconnected lives of five characters in Algiers from 1815 to 1833. The first, Dupond, is a French journalist covering the colonial campaign against Algeria, the second, Caviard, is a former soldier in Napoleon’s army who finds himself a prisoner in the city and later becomes a planner for the campaign. The other three Algerian characters have different attitudes to the Ottoman and French colonial powers. Ibn Mayyar thinks that politics is a means of building relationships with the Ottomans and even the French, whilst Hamma al-Sallaoui believes that revolution is the only means of achieving change. The fifth character, Douja, is suspended somewhere between all these: she witnesses the transformation of Algiers helplessly and is forced to become a part of it, for one must live according to the city’s rules, or leave. 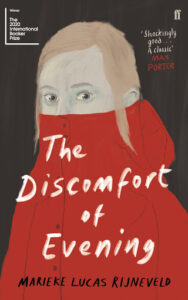 Ten-year-old Jas lives with her strictly religious parents and her siblings on a dairy farm where waste and frivolity are akin to sin. Despite the dreary routine of their days, Jas has a unique way of experiencing her world: her face soft like cheese under her mother’s hands; the texture of green warts, like capers, on migrating toads in the village; the sound of “blush words” that aren’t in the Bible.

One icy morning, the disciplined rhythm of her family’s life is ruptured by a tragic accident, and Jas is convinced she is to blame. As her parents’ suffering makes them increasingly distant, Jas and her siblings develop a curiosity about death that leads them into disturbing rituals and fantasies. Cocooned in her red winter coat, Jas dreams of “the other side” and of salvation, not knowing where this dreaming will finally lead her.

A bestseller in the Netherlands, Marieke Lucas Rijneveld’s radical debut novel The Discomfort of Evening offers readers a rare vision of rural and religious life in the Netherlands. In it, they ask: In the absence of comfort and care, what can the mind of a child invent to protect itself? And what happens when that is not enough? With stunning psychological acuity and images of haunting, violent beauty, Rijneveld has created a captivating world of language unlike any other. 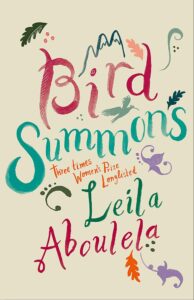 In her adventurous new novel, New York Times Notable author Leila Aboulela delivers a lively portrait of three women who embark on a journey of self-discovery while grappling with the conflicting demands of family, duty, and faith.

When Salma, Moni, and Iman—friends and active members of their local Muslim Women’s group—decide to take a road trip together to the Scottish Highlands, they leave behind lives often dominated by obligation, frustrated desire, and dull predictability. Each wants something more out of life, but fears the cost of taking it. Salma is successful and happily married, but tempted to risk it all when she’s contacted by her first love back in Egypt; Moni gave up a career in banking to care for her disabled son without the help of her indifferent husband; and Iman, in her twenties and already on her third marriage, longs for the freedom and autonomy she’s never known. When the women are visited by the Hoopoe, a sacred bird from Muslim and Celtic literature, they are compelled to question their relationships to faith and femininity, love, loyalty, and sacrifice. 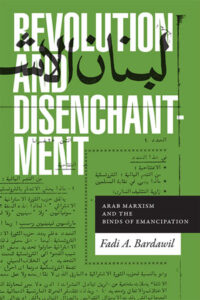 REVOLUTION AND DISENCHANTMENT: Arab Marxism and the Binds of Emancipation
Fadi A. Bardawil

The Arab Revolutions that began in 2011 reignited interest in the question of theory and practice, imbuing it with a burning political urgency. In Revolution and Disenchantment Fadi A. Bardawil redescribes for our present how an earlier generation of revolutionaries, the 1960s Arab New Left, addressed this question. Bardawil excavates the long-lost archive of the Marxist organization Socialist Lebanon and its main theorist, Waddah Charara, who articulated answers in their political practice to fundamental issues confronting revolutionaries worldwide: intellectuals as vectors of revolutionary theory; political organizations as mediators of theory and praxis; and nonemancipatory attachments as impediments to revolutionary practice. Drawing on historical and ethnographic methods and moving beyond familiar reception narratives of Marxist thought in the postcolony, Bardawil engages in “fieldwork in theory” that analyzes how theory seduces intellectuals, cultivates sensibilities, and authorizes political practice. Throughout, Bardawil underscores the resonances and tensions between Arab intellectual traditions and Western critical theory and postcolonial theory, deftly placing intellectuals from those traditions into a much-needed conversation. 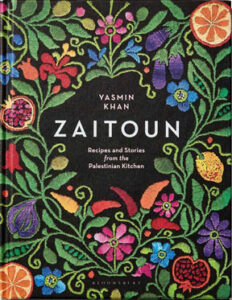 ‘People Are Tired of Militarization’: In Conversation with Meha Dixit

A dazzling celebration of Palestinian cuisine, featuring more than 80 modern recipes, captivating stories and stunning travel photography. Yasmin Khan unlocks the flavors and fragrances of modern Palestine, from the sun-kissed pomegranate stalls of Akka, on the coast of the Mediterranean Sea, through evergreen oases of date plantations in the Jordan Valley, to the fading fish markets of Gaza City.

Palestinian food is winningly fresh and bright, centered around colorful mezze dishes that feature the region’s bountiful eggplants, peppers, artichokes, and green beans; slow-cooked stews of chicken and lamb flavored with Palestinian barahat spice blends; and the marriage of local olive oil with earthy za’atar, served in small bowls to accompany toasted breads. It has evolved over several millennia through the influences of Arabic, Jewish, Armenian, Persian, Turkish, and Bedouin cultures and civilizations that have ruled over, or lived in, the area known as ancient Palestine.

In each place she visits, Khan enters the kitchens of Palestinians of all ages and backgrounds, discovering the secrets of their cuisine and sharing heartlifting stories. 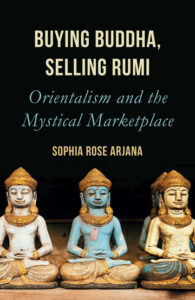 From jewellery to meditation pillows to tourist retreats, religious traditions – especially those of the East – are being commodified as never before. Imitated and rebranded as ‘New Age’ or ‘spiritual’, they are marketed to secular Westerners as an answer to suffering in the modern world, the ‘mystical’ and ‘exotic’ East promising a path to enlightenment and inner peace.

In Buying Buddha, Selling Rumi, Sophia Rose Arjana examines the appropriation and sale of Buddhism, Hinduism and Islam in the West today, the role of mysticism and Orientalism in the religious marketplace, and how the commodification of religion impacts people’s lives.

(This bookshelf was curated in the November 2020 print issue of the Mountain Ink.)