Why My Mother Is Being Forced To Attend School? 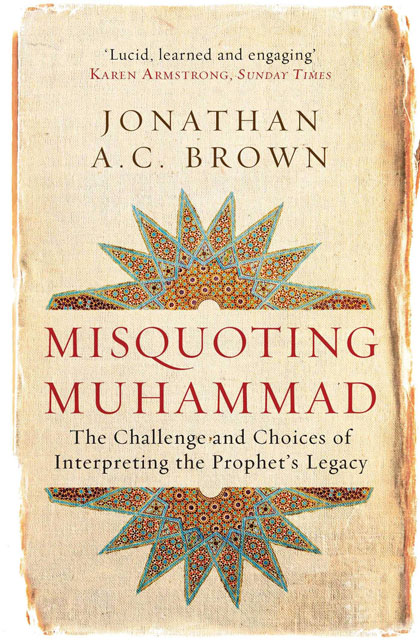 Few things provoke controversy in the modern world like the religion brought by Prophet Muhammad. Modern media are replete with alarm over jihad, underage marriage and the threat of amputation or stoning under Shariah law. Sometimes rumor, sometimes based on fact and often misunderstood, the tenets of Islamic law and dogma were not set in the religionâ€™s founding moments. They were developed, like in other world religions, over centuries by the clerical class of Muslim scholars.

Misquoting Muhammad takes the reader back in time through Islamic civilization and traces how and why such controversies developed, offering an inside view into how key and controversial aspects of Islam took shape. From the protests of the Arab Spring to Istanbul at the fall of the Ottoman Empire, and from the ochre red walls of Delhiâ€™s great mosques to the trade routes of the Indian Ocean world, Misquoting Muhammad lays out how Muslim intellectuals have sought to balance reason and revelation, weigh science and religion, and negotiate the eternal truths of scripture amid shifting values. 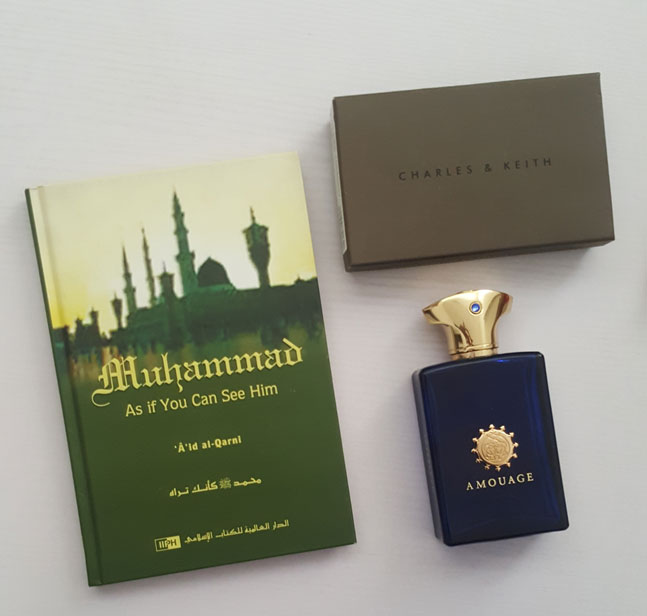 MUHAMMAD: As If You Can See Him
`A’id al-Qarni

A truly unique biographical account of the Holy Prophet, Muhammad: As If You Can See Him is author Dr. Aid ibn Abdullah al-Qarniâ€™s follow-up to his best-sellers Donâ€™t Be Sad and You Can Be the Happiest Woman in the World. This authentic Islamic book on Seerah (the Prophetâ€™s biography) describes the beloved Prophet Muhammad so intimately that it literally is as if you see him in front of you. Dr. al-Qarni has painted a detailed and very personal picture of the man who is known as a mercy to humanity. The Prophetâ€™s qualities and personality truly come to life in this must-read Islamic book. 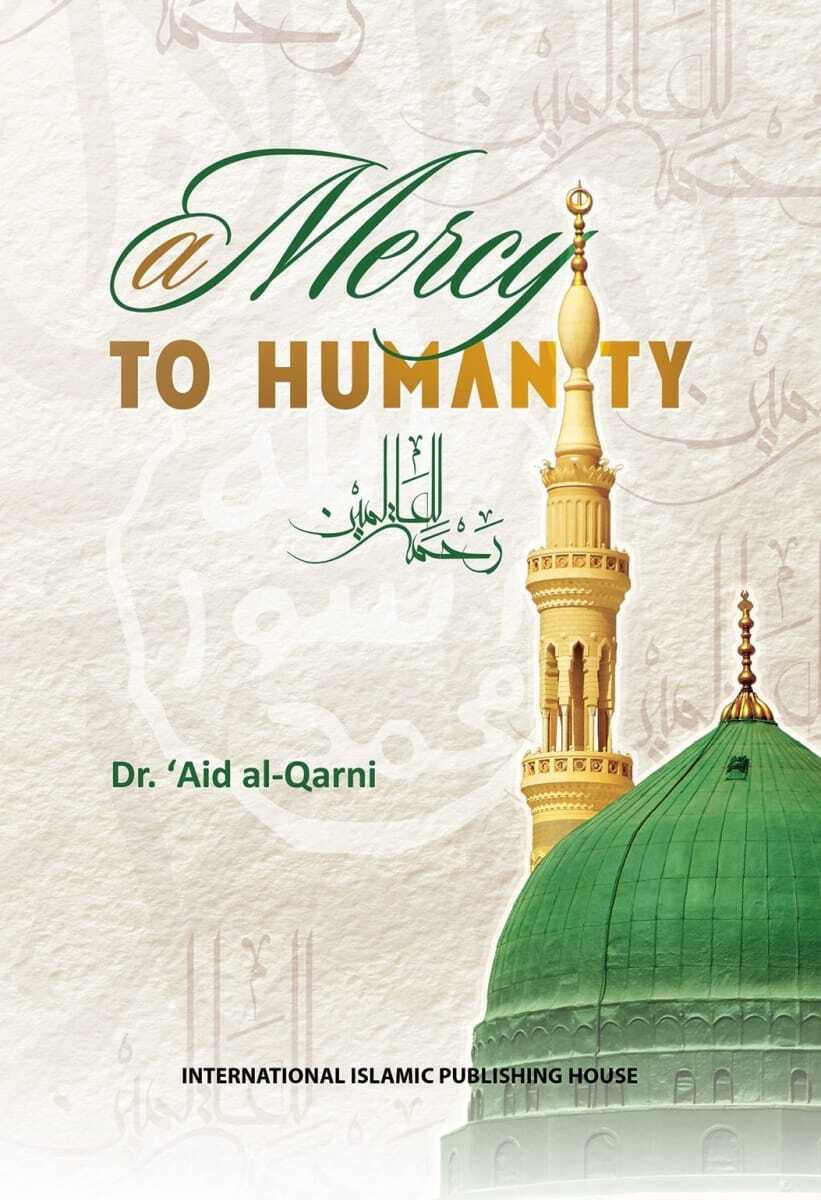 A MERCY TO HUMANITY
`A’id al-Qarni

In this unique study of the Prophetâ€™s biography, Dr. al-Qarni paints a vivid picture of the noble character of our Prophet (peace be upon him), delivering a personal insight into the events of his life. It is an emotional and engaging commentary that includes the authorâ€™s thoughts and reflections on the subject. A Mercy to Humanity by Dr. â€˜Ã‚â€™id al-Qarni is for all students of knowledge. In this unique study, al-Qarni delivers personal insight into the events of Prophet Muhammadâ€™s life. He also paints a vivid picture of his noble character. This is an emotional commentary replete with evocative language, narrated in the authorâ€™s well-known engaging style with which the readers are so familiar. 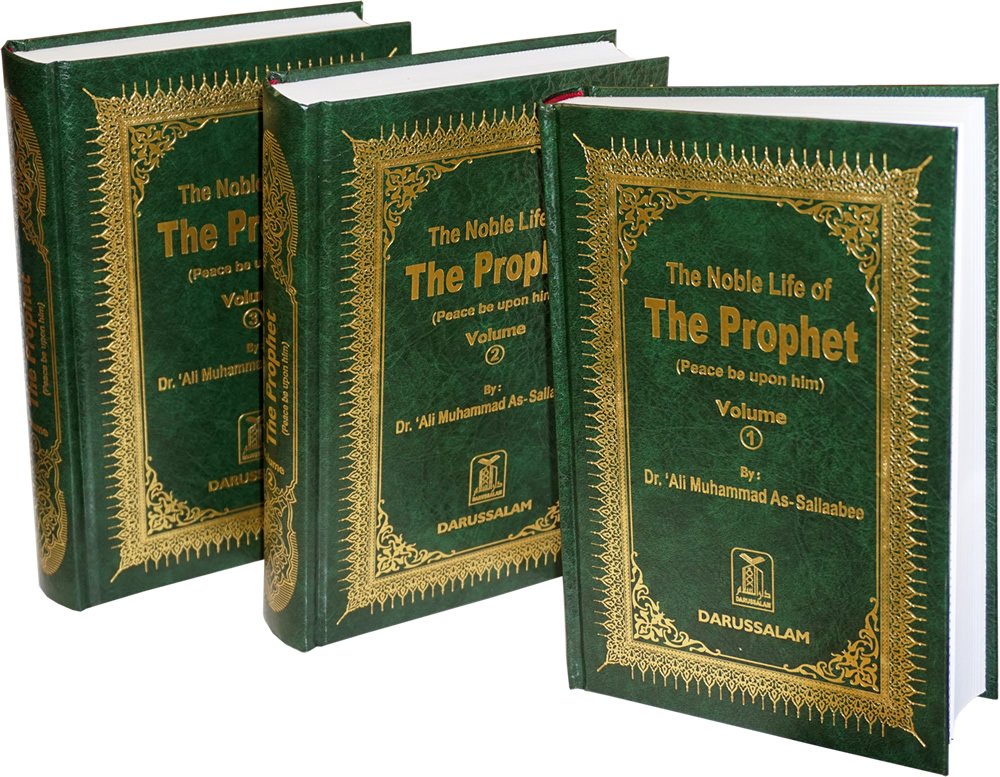 THE NOBLE LIFE OF THE PROPHET
Ali Muhammad As-Sallaabee

In this book, the events of the Prophet’s life, from the day he (S) was born and even before that day for background information-until the day he (S) died, have been recorded. Beyond enumerating the events of the Prophet’s life, lessons and morals from those events have been drawn to point out the significance of an event and the wisdom behind the Prophet’s actions or deeds, the Islamic ruling that is derived from a particular incident, and the impact that a given event should have on our character or choice of deeds is indicated. 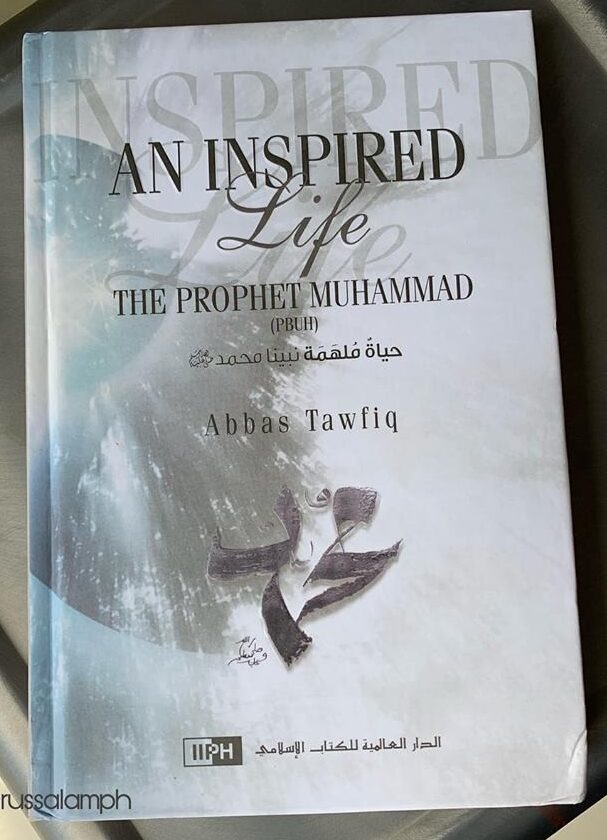 The work is very relevant today, as in the current political and social climate the intended ethics of Islam have become blurred and somewhat distorted. Dr. Abbas Tawfiq has highlighted the essence of the faith through his focus on the behavior of its Prophet. This book is a must for anyone who is drawn to further their knowledge of Islam and will appeal to both Muslim and non-Muslim alike. 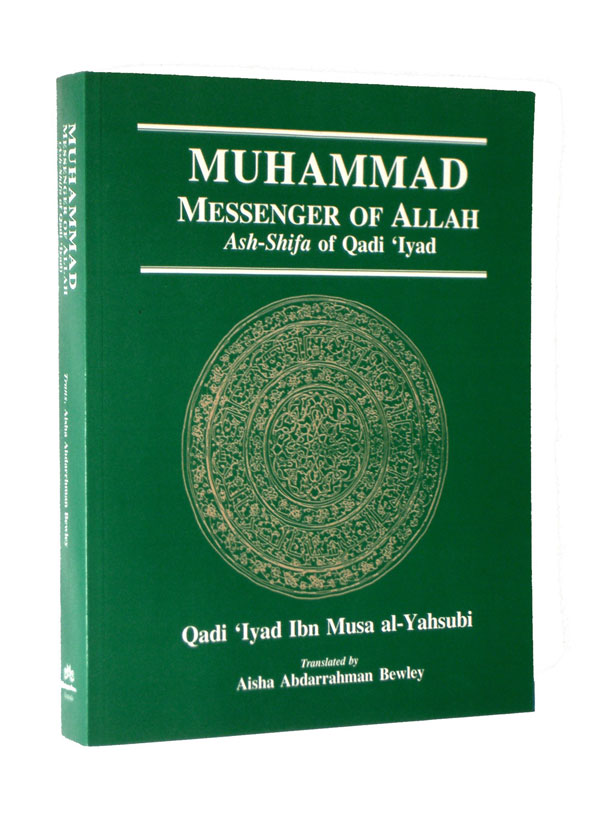 Kitab Ash-Shifa bi ta’rif huquq al-Mustafa, (Healing by the recognition of the Rights of the Chosen One), of Qadi ‘Iyad (d. 544H/1149CE) is perhaps the most frequently used and commented upon handbook in which the Prophet’s, may Allah bless him and grant him peace, life, his qualities and his miracles are described in every detail. Generally known by its short title, Ash-Shifa, this work was so highly admired throughout the Muslim world that it soon acquired a sanctity of its own for it is said: “If Ash-Shifa is found in a house, this house will not suffer any harm… when a sick person reads it or it is recited to him, Allah will restore his health.” Ash-Shifa gathers together all that is necessary to acquaint the reader with the true stature of the Prophet, may Allah bless him and grant him peace, with the esteem and respect which is due to him, and with the verdict regarding anyone who does not fulfil what his stature demands or who attempts to denigrate his supreme status – even by as much as a nail paring. 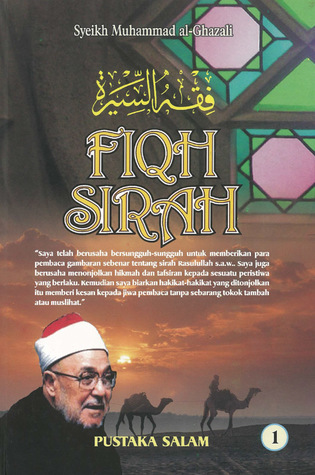 This book goes into detail and provides reasons and explanations for whatever took place. It is a blend of modern analysis and ancient detail. Its objective is to nurture faith, purify characters and fan the struggle to embrace the truth and be faithful to it.

Indeed, the life of the Prophet has been documented as a message for practical implementation, not intellectual entertainment’. You may think that you have studied the life of Muhammad by following his history from birth to death but this is a grave mistake. You will never really understand the Seerah unless you study the noble Qur’an and the purified Sunnah. The amount that you derive from these will tell the strength of your connection with the prophet of Islam, sallallahu `alaihi wa sallam’

Drawing upon his profound classical Islamic learning and an extensive knowledge of modern science, Sheikh al-Ghazali has broken new ground in the study of Seerah, bringing to bear a fresh but wholly authentic approach. This is a work which all serious students should have, to complement the Seerah of the Prophet Muhammad. 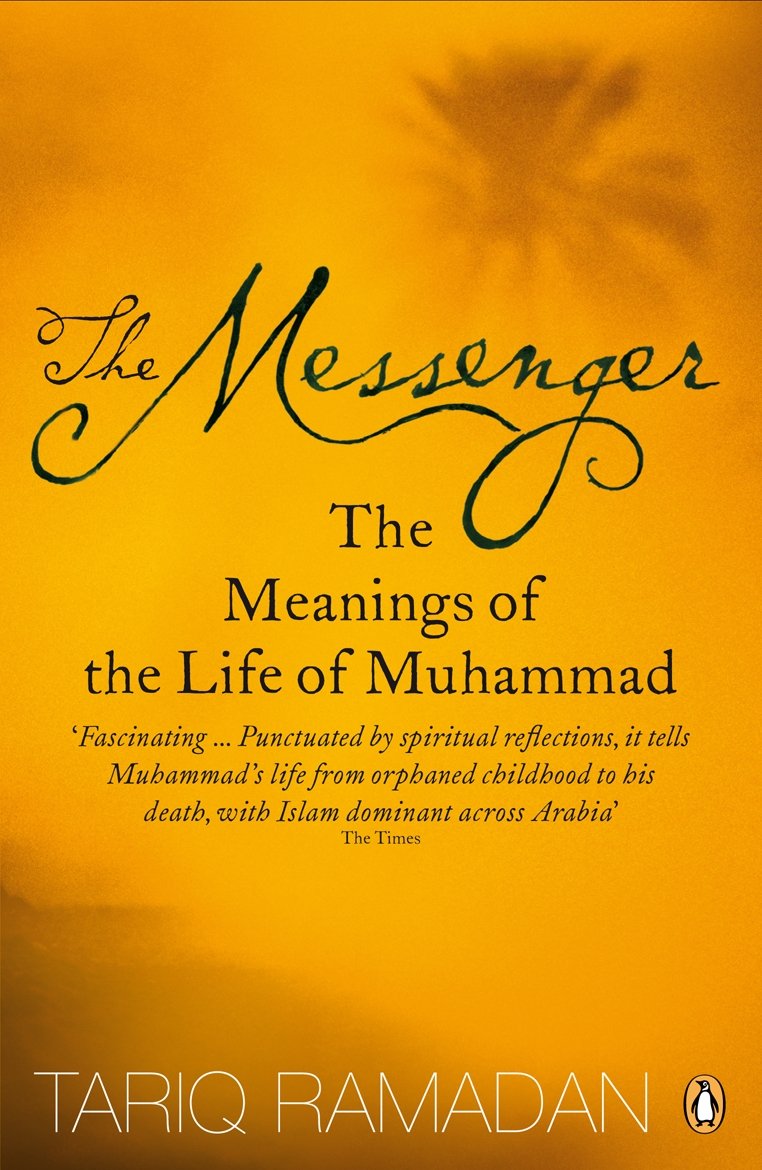 THE MESSENGER: The Meanings of the Life of Muhammad
Tariq Ramadan

Capturing a life that was often eventful, gripping, and highly charged, Ramadan provides both an intimate portrait of a man who was shy, kind, but determined, as well as a dramatic chronicle of a leader who launched a great religion and inspired a vast empire. Underscoring the historical importance and meaning of Muhammad, The Messenger addresses the significance of the Prophet for some of today’s most controversial issues, such as the treatment of the poor, the role of women, Islamic criminal punishments, war, racism, and relations with other religions. 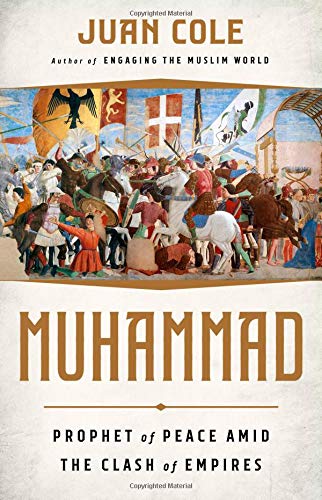 MUHAMMAD: Prophet of Peace Amid the Clash of Empires
Juan Cole

In the midst of the dramatic seventh-century war between two empires, Muhammad was a spiritual seeker in search of community and sanctuary. Many observers stereotype Islam and its scripture as inherently extreme or violent-a narrative that has overshadowed the truth of its roots. In this masterfully told account, preeminent Middle East expert Juan Cole takes us back to Islam’s-and the Prophet Muhammad’s-origin story.

Cole shows how Muhammad came of age in an era of unparalleled violence. The eastern Roman Empire and the Sasanian Empire of Iran fought savagely throughout the Near East and Asia Minor. Muhammad’s profound distress at the carnage of his times led him to envision an alternative movement, one firmly grounded in peace. The religion Muhammad founded, Islam, spread widely during his lifetime, relying on soft power instead of military might, and sought armistices even when militarily attacked. Cole sheds light on this forgotten history, reminding us that in the Qur’an, the legacy of that spiritual message endures. A vibrant history that brings to life the fascinating and complex world of the Prophet, Muhammad is the story of how peace is the rule and not the exception for one of the world’s most practiced religions.